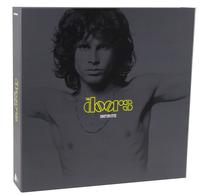 2 Stars
Posted Thursday, February 28, 2013 by Mark Wita I've purchased essentially every iteration of The Doors catalog on CD, DVD-A, DCC CD, vinyl boxed set, 45 RPM vinyl etc. I was skeptical of this SACD boxed set since it was "upsampled" from the same files used to make my Perception DVD-A boxed set. So I opened the Infinite SACD box and first played The Doors ST on my Oppo BDP-93 set to 5.1 surround sound with DSD bitstream output over HDMI. I was shocked when it didn't sound good. It sounded bad in fact. I also noticed that there was no sound coming from the surround speakers. I checked all my settings and everything was right. So I whipped out The Doors DVD-A Perception box disc and played The Doors ST in the same player. The surround channels were pumping out the sound like night and day compared to the SACD. So I moved on and tried the 5 other SACDs. All 5 have significant content in the surround channels. I went back to the self titled SACD and nada, no surround. So in summary there seems to be a defect with The Doors self titled.