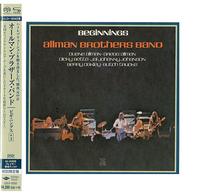 4 Stars
Posted Thursday, October 23, 2014 by Mark Powers My first version that I had was the original cassette in 1973. I knew of the two albums but as my budget then and now, a two for one is always hard to beat. This 2014 Japanese reissue is good but not fantastic. I will say honestly because of the older recordings the first in 69 and the second in 70 and this reissue double disc 1973 it could be by the time it gets to 2014 that it is not as sonically brilliant as I wanted it to be. I have been listening to this my whole life and as great as this single disc is, fantastic stereo balance, vocals are front center including Gregg's organ comes center when he sings which is quite nice, you know Duane is on the left and Dickey is on the right. Great kick drum presence throughout. I am not dissapointed, just that it is not what I would expect from an SHM SACD. Packaging: I can never say how much I love these little Japanese boxes with mini versions of actual original LP's. Glad I have added this to my library.