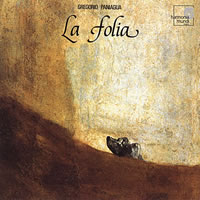 a great recording on the fringe of madness

5 Stars
Posted Tuesday, April 3, 2007 by etienne Folia means madness as it was in the late middle ages, when mad people where going along in the mud, tolerated in the middle of the crowd but not really taken care of. Madness was a mistery, but part of life, and all thought they may encounter that one day. Dances, such as Tarentelles (another great record by Atrium Musicae by the way) were invented in the hope to cure... Well, this album is full of dynamic and surprises, you instantly get the feeling you are in an artist workshop where from time to time they feel like trying something, music is enthrailing, and surprises... (I would advise you don't put the volume on full for the first listenning unless you don't have neighbours). I have the original LP, bought the cd, then the SACD, the later is only approaching what the LP is delivering.