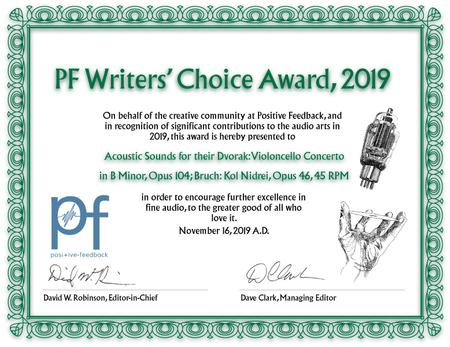 The 2LP classic now mastered and pressed at 45 RPM!

Plated and pressed at Quality Record Pressings, makers of the world's finest-sounding LPs!

"Chad Kassem never does anything half-way. It's either all in or nothing at all for today's acknowledged King of vinyl records. Here Chad gave Tom Fine (son of Mercury's original founders Robert Fine and Wilma Cozart Fine) and Ryan Smith (mastering engineer at Sterling Sound) free reign to give this famed Mercury Records recording the remastering it richly deserves. Nothing was left to chance. ... This new Acoustic Sounds reissue — whether it's the Fine/Smith treatment or the different master tape (or both?) — markedly improves on the original recording's sense of space, dynamics and solidity/stability of Starker's 'image' while minimizing the Mercury string sound. One last thing. The time Tom and Ryan spent cutting multiple masters to get one quiet cut really paid dividends in the end. This is a super quiet recording allowing the tiniest nuances of the original recording to emerge unscathed. Highly recommended." — Myles B. Astor, senior editor Positive Feedback.com for the 2019 PF Writers' Choice Awards. Read the whole review and see the other winners from the 2019 PF Writers' Choice Awards here.

"This new 45 RPM remastered reissue by Tom Fine and Ryan Smith might just be the first analog reissue that is hands down better than the original (and my original is a minty RFR P17 US cleaned before playing). No ifs, ands or buts. No excuses needed. ... Tom Fine and Ryan Smith turned to the original backup 1/2-inch master tape for this release. No detail was too small and Tom and Ryan had to cut several lacquers until they achieved the desired quietness. ... Dorati and the LSO have never sounded better. While the Dvorak captures everyone's attention, it's perhaps the performance of Bruch's Kol Nidrei that is the hidden gem on this recording. The low end, extension and the sound of Starker's cello is off the charts. Starker's cello is revealed like never before on this reissue; the detail, tone and solidity of his cello is stunning. ... Highly recommended!" — Myles B. Astor, senior editor, Positive-Feedback.com

Thomas Fine made the 3-2 mixes with mastering engineer Ryan K. Smith at Sterling Sound's new facility in Nashville, Tennesee. Smith manually controlled groove margin and depth on his Neumann VMS-80 lathe, working with no preview signal and bypassing the lathe's margin-control computer. In doing so, he cut these sides the same way the original LP was cut by George Piros, who was Fine Recording Inc's VP and head of mastering. As with the original LP, no "sweetening" equalization or dynamic range control was used.

Hungarian-American cellist János Starker epitomized refined elegance and superbly subtle bow work. Starker, who died in April 2013, was one of the 20th century's most renowned cellists. The Dvorak Cello Concerto and Bruch's Kol Nidrei were recorded July 6, 7 and 10, 1962 at Watford Town Hall outside London. Three Schoeps M210 microphones, set in omnidirectional pattern, were hung across the front of the orchestra, with the players positioned on the floor of the hall in order to best utilize its acoustics.

The microphones direct fed 3-track recorders: a 1/2" tape machine and a 35mm magnetic film recorder. Both first-generation tapes and first-generation films were edited into production masters. At the original session, Wilma Cozart Fine was the Recording Director, Harold Lawrence was the Musical Supervisor, C. Robert Fine was the Chief Engineer and Technical Supervisor, and Robert Eberenz was the Associate Engineer.

The original LP was cut from the 35mm film, and the Mercury Living Presence logo on the front cover included the 35mm designation. Over time, the 35mm mag-film material deteriorated and the master is now not in good playable condition. Meanwhile, the 1/2" magnetic tape has held up well and still sounds as good as the day it was recorded.

This 2LP set, cut at 45 RPM, allows for the full dynamics present on the master tapes to shine through masterfully, as the wider-spaced grooves let your stereo cartridge track more accurately. Stoughton Printing old-style tip-on gatefold jacket. Plated and pressed at Quality Record Pressings, makers of the world's finest-sounding LPs.